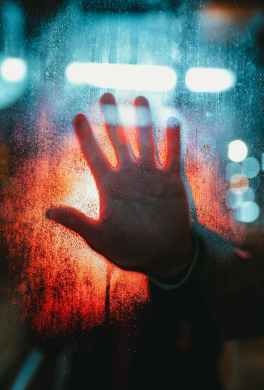 “Again I returned to the world of normality and every time I came back, it seemed that the place had gotten more insane than before, or maybe I had – often it was hard to tell. It was true that I was a wreck compared to everyone else. Everyone strolled through life living sane and orderly lives, but meanwhile I could feel the madness scratching away at the inside of my skin. I could feel the world attacking me for who I was. I could hear the sirens screaming inside my skull; cries of horror in the dark alleyways of my mind. I knew deep down that something was wrong with me – something was very wrong with me and my life. I guess like everyone else, I felt like I had a right to belong somewhere in this world. Even if it was just for a short while, I felt like I should have had a taste of home – a taste of what it was like to stare into the eyes of someone who understood me for who I really was. But everywhere I went I was left confused and alienated by what I saw around me. The empty conversations. The mindless conventions. The strange mannequin faces. As time went on, the idea of belonging somewhere in my lifetime increasingly became a distant dream. Some people assured me that everyone had their place in society, but for me that place was seemingly in the solitary shadows, in the sewers and gutters – in the dark rooms of isolation where my heart screamed out for a connection that would just not come.

Sometimes when it all became too much, I looked at the phone and thought of calling for help, but realistically there was no one out there to call. The times I had opened up to others and tried to get close, I had been shrugged off and cast out. I understood that I guess. People had their own problems to deal with and they didn’t need a disaster like me to add to their baggage. Over time I came to realise that my fight was to be a solitary one and one that was probably going to last a lifetime. And yes I can’t lie: at times the idea of giving up becomes desirable, but ultimately something inside will not let myself be murdered by this world without a fight. Like others before me, I will keep searching for whatever strength I can find. Fighting my way through the shadows. Dragging my smouldered, blistered dreams through the flames. Breathing life back into my starving soul. Another scratched and scarred being searching for the daylight that will one day make all this darkness disappear.”

One thought on “~ An Emergency Within ~”